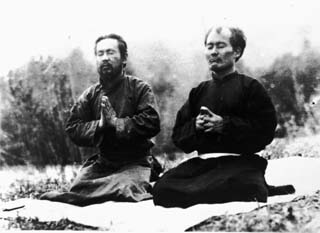 “A practice intended to aid one in joining with the universal spirit and to help one understand the devine mission that is one’s life goal to fulfill.” – From the glossary of… The Principles of Aikido by Mitsugi Saotome

Chinkon is defined as… to settle down and calm the spirit and Kishin is defined as… returning to the divine or kami, which refers to achieving a profound contemplative state where one is grounded to the divine universe.  Chinkon and kishin are generally practiced together where the first part, chinkon, involves revitalization of the senses and the gathering of spirit, while the second part, kishin, involves an alert meditative state.  It’s been said that chinkon and kishin together form a method of achieving unity with the divine, although each has it’s own function.  Chinkon is said, by some, to gather the spirits of the souls wandering the ether into the tanden (abdominal center) while kishin activates those spirits.

Chinkon-kishin has ancient roots that are referenced in the old Shinto texts such as the Kojiki.  The shamanistic practice of mystical breathing and meditation of uniting the divine and human spirits was often used in old times in the preparation of waterfall misogi, an ascetic practice of standing under a freezing waterfall for long periods of time, in meditation, with the objective of cleansing the mind, body, and spirit.  O Sensei often practiced this kind of misogi (spiritual cleansing), but to O Sensei, aikido was his daily misogi practice.  For this reason the founder would prepare for the misogi of his aikido training by performing chinkon-kishin techniques in his warmups.

The practice of traditional chinkon-kishin largely fell out of practice in the Shinto tradition until Onisaburo Deguchi and revived the practice within the Omoto Kyo Shinto religious sect, in the early 1900’s.  When O Sensei met Onisaburo and embraced the Omoto religion he also embraced the practice of chinkon-kishin as taught and practiced by Onisaburo.  O Sensei had embraced the rich Shinto culture and mythology since his childhood.  Omoto Kyo, as a new form of an ancient religion and the charismatic leadership of Onisaburo, had a profound effect on O Sensei’s spiritual path.  The founder and another Omoto follower are show here practicing kishin meditation with their hands folded into various mudra or hand postures.

According to Yasuaki Deguchi, grandson of the Omoto leader Onisaburo Deguchi, Onisaburo’s received his knowledge of chinkon-kishin from a revelation he had while engaging in ascetic practices on Mt. Takakuma.  He also referred to a method of kishin mentioned in the section concerning Emporor Chuai in the Kojiki (Record of Ancient Matters) and in the record of Empress Jinko in the Ni-honshoki (Chronicle of Japan).  In later years the practice of chinkon-kishin was abandoned in the Omoto Kyo religion because of the profound and often surprising effect it had on its practitioners.  However, the practice was never abandoned by O Sensei and is found mixed into aikido warmups in dojo everywhere today.

There are several forms of chinkon-kishin that O Sensei integrated into the warmups of aikido training.  These exercises, although generally not clearly understood, even by uchideshi of O Sensei, are still practiced in many aikido dojo around the world.  They are practiced largely for their obvious physical benefits.  They are also practiced, in part, for their historical significance.  The founder’s students who retained the practice differ significantly in the details as well as the level of importance they place on this practice, and most of them profess not to understand it.  One student of O Sensei said… “We practice it because it is very important… Sensei said that we would discover the meaning of these techniques for ourselves.”

Furitama: “soul shaking”, “settling the ki”, or “vibration of the spirit”

Furitama is practiced standing with the legs shoulder-width apart.  The hands are placed together with the right hand over the left.  A small space is left between the hands.  The hands are placed in front of the abdomen and shaken vigorously up and down.  Inhale to the top of the head rising up naturally.  Then exhale to the bottom of your feet as  you continue shaking your hands up and down.  The exercise if finished in silent and still meditative kishin.

This chinkon exercise was intended to gather the spirits of the divine into ones center… calming the spirit… vibrating the soul.  It’s an effective way to gather your thoughts, center your mind and focus your intention.

Another form of “vibration of the spirit” can be seen in the practice of raising the hands over your head, shaking them vigorously while fingers are extended.  Then throwing the hands down toward the ground.  The founder would speak of shaking the dust from the joints when referring to this wrist loosening exercise.  For him it was a vitalizing movement to shake the impurities from the body… a form of misogi to prepare for aikido practice.

Torifune, also know as kogi-fune or the rowing exercise involves the arms and body moving in a boat rowing motion.  According to the Kami no Michi, an important text on Shintoism, the hands were clenched in fists, with the thumbs inside, and hand movement was very linear.  Pictures of O’Sense show him with his hands in traditional punching fists, with the thumbs outside.  In old video footage he can be seen practicing  torifune with both linear punching movements as well as sweeping, rowing movements.  Today torifune appears to be mostly practiced with open hands, fingers pointing down, writs being thrust forward and drawn back to the hips.

Chi-no-kokyu: Breath of earth
The breath of earth involves exhaling slowly and bring the hands down in chi-no-kokyu (breath of earth) posture.  The hands are brought down the sides of our body as though pushing down the universe until the hands come back together in front of our abdomen to complete the circle.

Generally, the cycle of ten-no-kokyu and chi-no-kokyu is repeated 3 times in succession.  When practiced by itself, there is usually a quiet pause of kishin at the end of the breathing cycle.  When combined with the other exercises the transitions change and the kishin may move to the end of the combinations.

It’s interesting to note that aikido associations heavily influenced by Koichi Tohei practice a great many other kihon undo exercises that Tohei embraced and extended… said to help manifest ki.  As his interests shifted from the old Shinto ways and his attention became focused on the principles of ki, he took some of chinkon-kishin exercises and modified them to compliment his newly codified catalog of ki exercises.

When I began practicing aikido, almost 20 years ago I can’t recall ever seeing Mitsugi Saotome Sensei ever lead us in any of the chinkon-kishin.  This may be because O Sensei de-emphasised the practice in his later years.  Or, it may be because O Sensei left his students, especially in the later years, to wonder about or ignore the older Shinto practices which were seen as increasingly anachronistic in a modern Japan.  It was some years later that I noticed Saotome Sensei introduce his students to furitama, torifune, and ibuki kokyu, possibly as he was rediscovering his own roots in aikido and paying respect to those early traditions.